The Case of Cholistan's Stolen Land 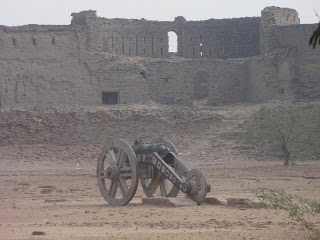 Anyone passing through lower Cholistan, especially if they happen to be participating in the famous Cholistan jeep rally, will not fail to notice the prominent Lashkare Tayyaba (LeT) and Jamat-ud-Daawa (JuD) wall-chalkings. One of the slogans decries India for being “a water thief.” Water is a sensitive issue for people who don’t have access to it. India’s decision to construct new dams or to control the flow of water is causing major concern in the area. But that is not only the cause of concern in the region.
Move on towards Sadiqabad and Rahimyar Khan in Bahawalpur and you will hear farmers complain about how the army is stealing their share of water. In the past few years, people of the area have held public demonstration against water theft but to no avail. According to official estimates, 21,000 acres of land in these two districts are affected due to water theft from the Abbasia link canal. Out of the canal’s capacity of 4500 cusecs of water, nearly 350-400 cusecs are being stolen. This canal became operational in 2002 and the army units have made 20 illegal outlets (104-109 RD and 213-228 RD) at Chak Wahni and Qasimwala heads to feed their lands. Officially, the army is only allowed one outlet to feed its troops while they exercise in the area. Irrigation officials claim that even the legal outlet has been expanded illegally to draw more water. Driving along the canal, one can spot huge excavating machines and dumpers meant to dig the land and make outlets. Taking their cue from the army, others have also joined in the fray. The irrigation officials named some local politicians and professionals such as Asmatullah Niazi (district president, PML-Q), Iqbal Moghul (Naib Nazim, Liaquatpur), Iqbal Channar (MPA, PML-N), Professors Rafiq Minhas and Nazeer Khan, relatives of a local PPP politician, Col. (retd.) Naveed, and Brig. (retd.) S. M. Tiwana as some of those who steal water. But irrigation department officials contend that the army steals a larger share and poses a bigger problem. And unless they don’t stop this illegal practice, the civilians will continue to follow in their footsteps. Furthermore, civilian water thieves argue that they won’t stop until the army does the same. This makes it almost impossible for irrigation officials to stop anyone else. In any case, a lot of the civilians involved in stealing are well connected with the army.

Irrigation officials have tried their level best to put an end to this of water theft, but they lack the resources and the authority to contest the army’s involvement. The staff responsible for stopping such illegal practices comprises a sub-divisional officer (SDO), a mate and four baildars (agricultural labor). And they have no legal authority to arrest the offenders or take any action against them. The police, on the other hand, are reluctant to act because of fear and for administrative reasons. Since the area in question falls between two districts – Bahawalpur and Rahimyar Khan – it is usually not clear which DPO has jurisdiction to carry out the anti-theft operations. In any case, such administrative excuses are often used to hide the fact that no one wants to take on the army. A couple of years back, when an irrigation department officer tried to close one of the army’s illegal outlets, he was manhandled and kept in custody for 24 hours. Interestingly, the army has also forcibly taken over two irrigation rest houses at Maitla and Qasimwala. The provincial administration and the chief minister Punjab knows of the matter and was updated about the situation during his visit to the area in June/July 2008. Despite all information he just evaded the issue. The officials seemed especially unhappy with one army officer in charge of these operations, Major Manucheher Munawar Awan.
Filing complaints against such high-handedness is a tough job because these matters do not come under the jurisdiction of Bahawalpur Corps. Oddly enough such issues fall are under the administrative control of the Pannu Aqil Corps, which operates through an office at Bahadur Chowk, Rahimyar Khan. The area was abuzz with complaints about the high handedness of the major representing the Panu Aqil Corps.
Water theft, however, is part, or an extension of a bigger scam involving the army’s illegal occupation and use of state land. According to official records, the army has illegally occupied 99, 865 acres of Cholistan land and 5,000 acres belonging to the forest department. Moreover, the army has 2,07,992 acres legally leased to it by the provincial government for operational purposes such as for building firing ranges. A large chunk of the legally-leased land was given to the army in 1978. In the larger Bahawalpur division (Cholistan is part of Bahawalpur), the army only has ownership of about 8,700 acres that were sold to it out of which 8500 acres were purchased by the army to build the new cantonment in Bahawalpur city. However, the illegal acquisition of land and its illegal subletting started mainly after 1999. These activities coincided with the tenure of three army officers who were made in charge of the Cholistan Development Authority (CDA) and had the power to allocate land. The first one was a serving major general, S. Zaidi who served for a year to be followed by a retired major general Razzak and later a retired brigadier. Brig. (retd) Tiwana also acquired personal stake in the illegal subletting of the illegally occupied land. The brigadier is now a cultivator of hundreds of acres. The tenure of the three officers spanned nearly a decade 1999-2008.
A lot of the illegally occupied land is used for commercial purposes. According to official records, the army has illegally leased out 17, 063 acres of the illegally occupied land and 3,000 acres of its legally leased land. The subletting activity means leasing the land to big local landowners and businessmen of the area or non-locals who have acquired this land. In a lot of cases, land is leased out in the name of some senior army personnel who then sublet it to others. The illegal water outlets are meant to provide uninterrupted supply of water. It is a very clever scheme because the cultivators don’t have to pay any water rates or agricultural and other taxes levied by the provincial government. The land tends to be more productive then others because it is virgin land and has ample supply of water. The going rate in the area is Rs 35,000 per acre (this rate is common information for the local cultivators). However, there is no standard rate as far as the army is concerned. Depending on their level of acquaintanceship with the army, some lessees may pay a lower rental per acre. In any case, there is no transparency in this business and it is common knowledge that the actual rental income deposited in the Corps Commander’s special fund with the intention of being spend on soldier’s welfare is often less than the going rate. There is little transparency of the special fund which was established during Zia’s reign as an amount of money placed at the Corps Commander’s discretion for secret or special operations, or welfare of soldiers. When a local revenue officers raised questions about the subletting and rentals he was politely told to mind his own business as a lot of ‘big fish’ had stakes in the property.
So the business continues, no questions asked. The Poor Cholistanis are being deprived of their land and the farmers are being deprived water, creating major resentment among the locals against a state institution and the state itself.
Posted by Ayesha Siddiqa at 9:52 AM