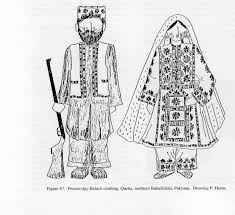 A few days ago I was surprised to hear a renowned journalist sit and boast about his Baluch lineage. The boasting stuck out because then it was accompanied with claims of good knowledge of the unfortunate province. The comfort with which he spoke about the archaic nature of the tribal culture, his own experience of being head of a tribe at an early age was enough to impress the numerous foreigners sitting there that night. I am sure many of the ignoramuses amongst the audience must have felt pangs of respect for the gent as they realized how he must have abandoned the traditions to turn into a modern, liberal urbanite. All the excitement must have made them not notice the one critical detail of his father being an army officer (on a separate note the number of army brats that now occupy positions of significance in the private sector, think-tanks, media, NGOs etc., is just amazing).

Referring to the journalist, I was in a bit of a shock that evening because the person in question had never boosted about his Baluch lineage before or told tales that may raise suspicion in your mind that he probably knew something about Baluchistan or the culture. My mind suddenly wandered to another character, a female this time who has been presented by the agencies as the grand daughter of some Baluch tribal chief. The woman – a femme fatale – for the notorious ISI was lucky to get her entire resume and life doctored by the military’s intelligence agency and sexed-up to make her appear acceptable in the eyes of the foreigners, local elite and many other customers. The last I remember the young woman from when I met her many years ago was that her mother was some medical doctor in one of the military’s welfare foundations and she was raised in Multan. Reminded me of yet another ISI’s femme fetal, who the other day, was boosting in front of a foreign audience how well she knew of South Punjab because her retired military bureaucrat father had some land in an areas she referred to as the boonies. Such a claim was being made to show her knowledge of the area and to impress an important western diplomat of what she was saying about some positive change in the place was the gospel truth. A common friend later told me that this woman might have visited the place once but never again because the piece of land was taken care of by her elder sister. But let’s suppose she went to the boondocks in South Punjab every month or week; or lets imagine the journalist I referred to earlier was of Baluch descent; or another journalist close to the heart of Pakistan’s military establishment who claims to be a blue-blooded Kashmiri was actually a blue-blooded Kashmiri, does it naturally give them sufficient knowledge of these places, especially what people suffered – their joys and sorrows? The journalist claiming to be Kashmiri has never lived in Kashmir or even visited the place besides accompanying his army dad or in army helicopters, nor has the two man and woman claiming Baluch lineage have ever lived there. They have certainly not seen that part of being a Baluch which experiences humiliation and torture at the hands of the state and its numerous agents. It was not too long ago that I met a newly-inducted civil bureaucrat from the Makran coast. He was frustrated, anxious and deeply hurt as he talked about how the state did not appreciate that people like him did not want to fight a battle with the state and yet were humiliated and dragged around. people like him were caught in the middle between not wanting to fight with the nationalists and being humiliated by the state all the time. His was a blood-curdling narrative about what goes on in people's minds when military and para-military forces barge into people's homes in search of those declared terrorists or criminal. The manner in which families are treated is something that would produce greater anger and resentment. Their's is a different lineage, which, in the eyes of the state cannot be worn around like a medal. There are no prizes for these Baluch whose right over their resources is challenged in the name of the state's desire to bring modernity. The Baluch cannot be made party to a decision to contract out Gwadar to the Chinese or any other firm because they appear as anti-modern. Intriguingly, the tribalism, which the state and General Musharraf (and his predecessors) so loathed is then owned in a different way by giving the mata haris the same identity and lineage. What is despised and targeted in one place is celebrated and romanticised in other cases.

To those, who like to wear their lineage like a medal to gain prizes from certain quarters, I can only say that an ethnicity or lineage is not in a name or a title. It is also about collective experience. You are either a part of it or you cannot pretend ownership of that identity.
Posted by Ayesha Siddiqa at 4:05 AM